In the memorial ceremony much attention is focused on the red ceremonial table, which holds the helmets representing each of the fallen being honoured. These helmets, whether black for structural, yellow for wildland firefighters or caps for wildland pilots, are presented to the families of the fallen during the ceremony. At the corners of the ceremonial table are silent sentries, who carry an item that has some symbolic and spiritual significance. 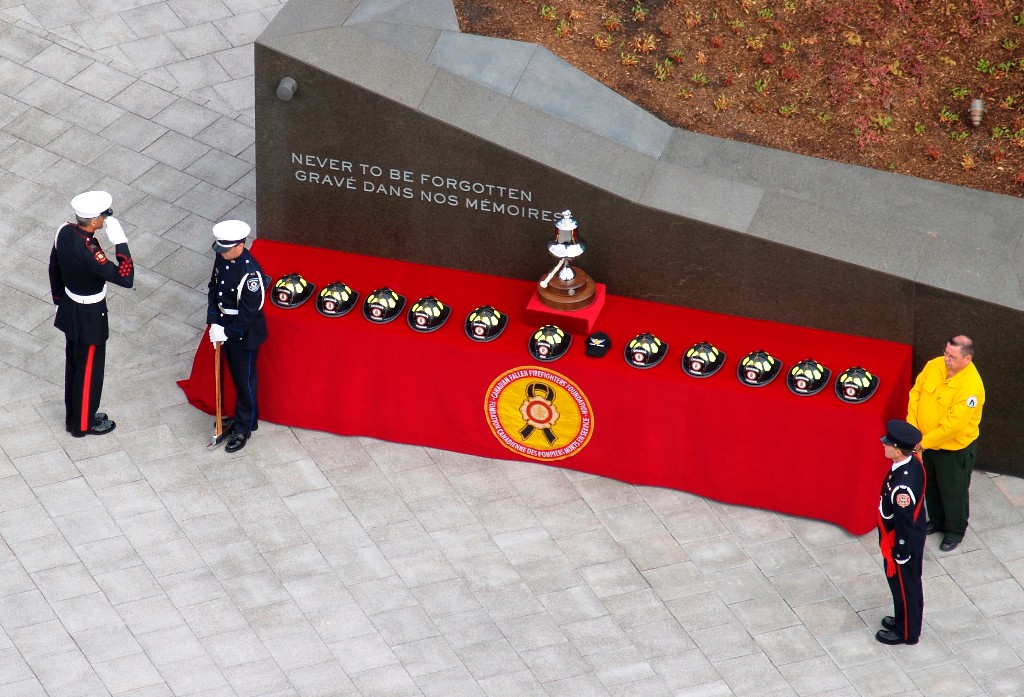 The pre-ceremony begins with the posting of the silent sentries at the ceremonial table. Once in place, the Headdress Party carrying the helmets or caps, begins its march toward the ceremonial table. The Headdress Party is randomly made up of firefighters from all parts of the country and does the presentation to the family of the fallen. The fallen firefighter’s own fire service and Foundation members are purposely excluded from presenting as the presentation is symbolically from the entire Canadian Fire Service. Honouring the Fallen includes a medal and helmet presentation to the family of those firefighters who were killed on duty or died from a work related illness while still actively employed. An extra helmet is placed on a raised pedestal to represent all Canadian line of duty deaths since 1848. This helmet remains from year to year with the hopes that no other helmet or cap will accompany it at the annual ceremony.

The fire service of today is ever changing, but is steeped in traditions 200 years old. The ringing of the bell and the Firefighter's Prayer are two traditions of the fire service which reflect respect and honour to those who gave their lives to their duty. In the past each alarm was sounded by a bell, which summoned these brave souls to fight fires and to place their lives in jeopardy for the good of their fellow citizens. And when the fire was out and the alarm had come to an end, it was the bell that signaled to all the completion of that call. When a firefighter had died in the line of duty, paying the supreme sacrifice, it was the toll of the bell that solemnly announced a comrades passing and is usually three rings of the bell, three times.