In Edmonton at the Provincial Forest Fire Centre, Wildland Director James MacKinnon made the presentation on behalf of the Education Committee to Amberly Tilley Neilson.  Amberly is the daughter of wildland pilot Brian Tilley who died in the line of duty in 2010. Amberly is studying to become a Dental Assistant in Edmonton, AB.

In Vancouver at VFR Station 10, CFFF Vice President Doug Wylie made the presentation on behalf of the Education Committee to Margaret Maj. Margaret is the daughter of Toronto Fire Services Acting Captain Sylvester Maj who died in the line of duty in 2011. Margaret is studying science at UBC on her quest to become a veterinarian.

The Scholarship is named after former Foundation Treasurer Doug Lock who passed away in March 2012 just after developing the CFFF Scholarship program. The CFFF/ Doug Lock Memorial Scholarship is a $6000 a year, four year scholarship awarded to the child or spouse of a Canadian firefighter recognized by the Foundation. The Foundation is grateful for the support of all our sponsors and donators who make it possible for us to provide this education support to the families of our fallen firefighters. 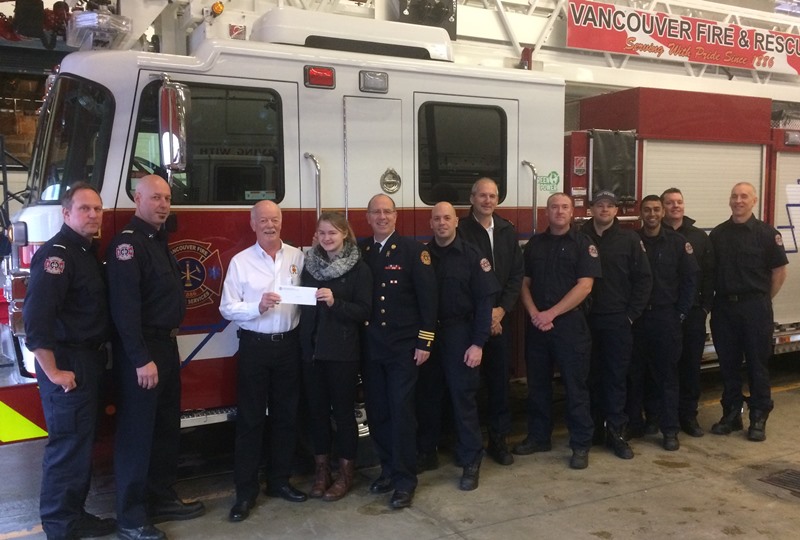 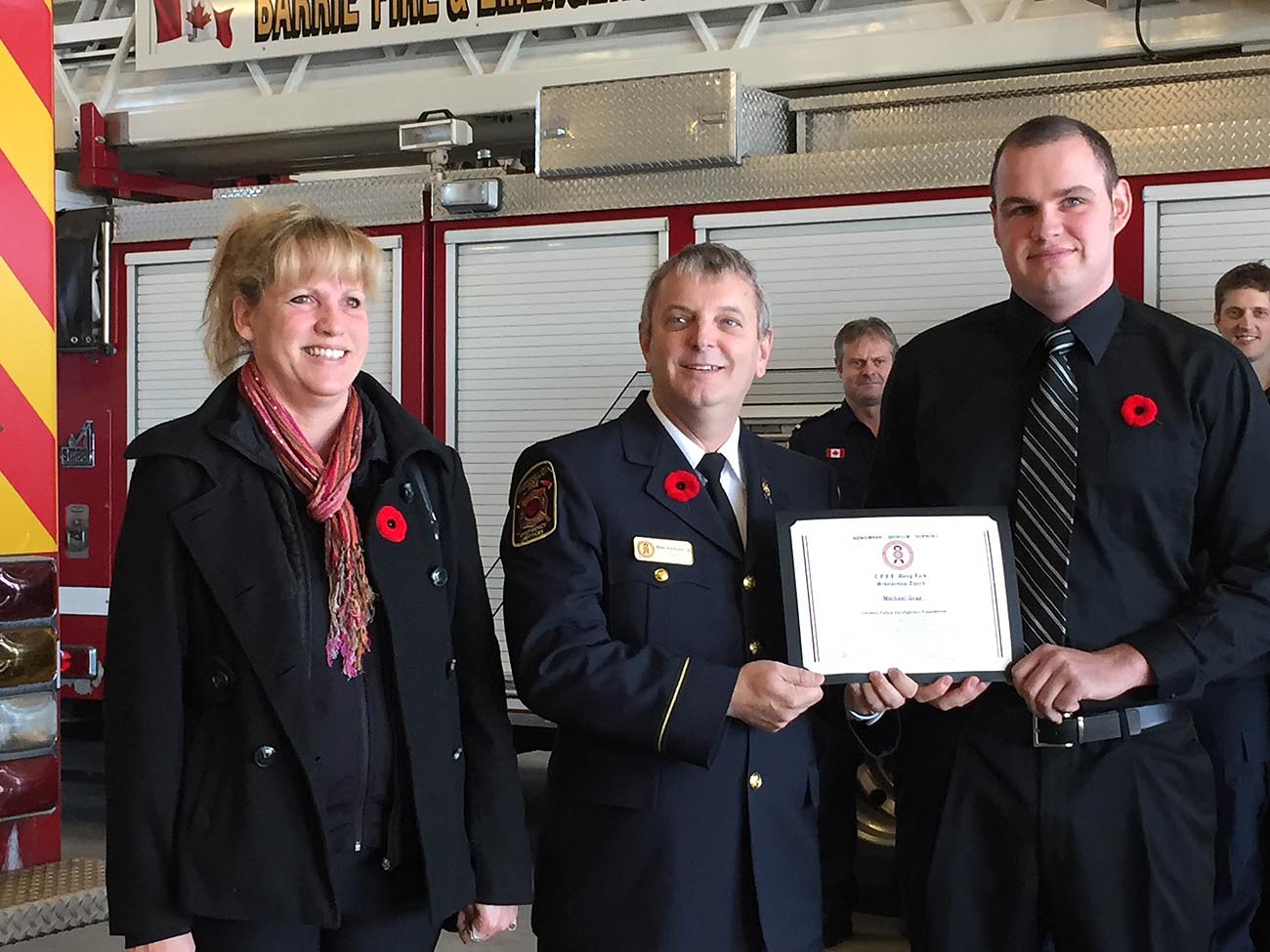 CFFF President Robert Kirkpatrick had the honour of presenting a CFFF scholarship award to Michael Gray. Michael is the son of Toronto Fire Services Acting Captain David Gray who died from a work related illness on March 9, 2010 at the age of 48. He joined the fire service in 1987. Michael, accompanied by his mother Carolyn, was presented the award at the Barrie (ON) Fire & Emergency Services HQ near their home. Michael is currently enrolled in the Paramedic Care program at Georgian College. The Foundation would like to thank all our supporters of the Education Fund and Barrie Fire Chief John Lynn and his staff for facilitating the presentation. 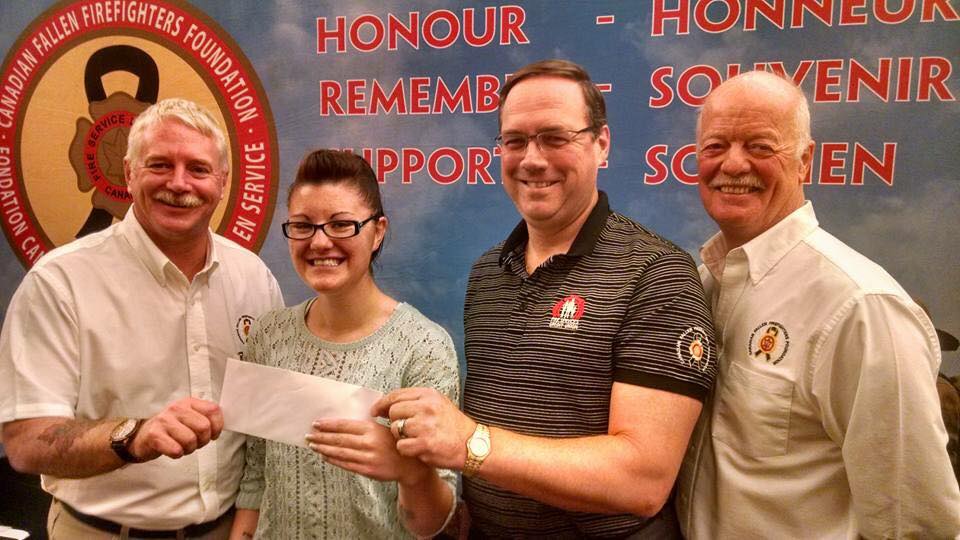 The Foundation is very pleased to announce that Miss Courtney Hill of Victoria BC was awarded the 2015 CFFF / Doug Lock Memorial Scholarship.

Courtney is the daughter of Jodi and Dave Hill. Firefighter Dave Hill of CFB Esquimalt Fire Rescue Died in the line of duty in August 2012. 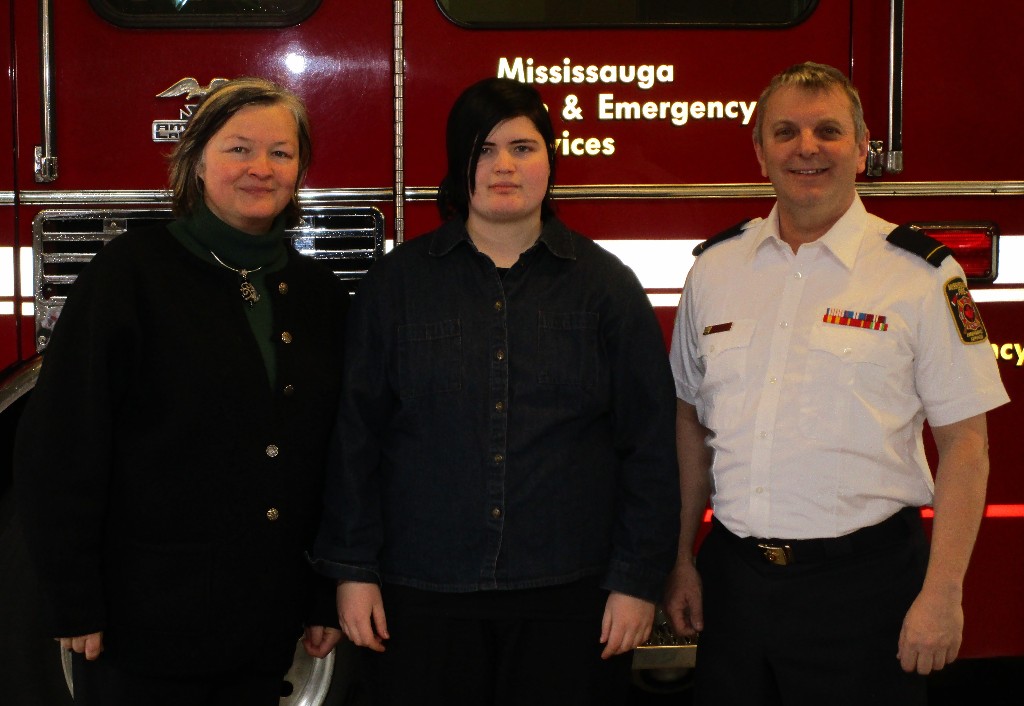 The Foundation is very pleased to announce that Miss Em Maj of Mississauga ON was awarded the 2014 CFFF / Doug Lock Memorial Scholarship.

Miss Maj is the daughter of Barbara and Sylvester Maj.   Acting Captain Sylvester Maj of the Toronto Fire Services died in the line of duty in July 2011.    Em is attending Sheraton College Institute of Technology and Advanced Learning in Oakville, ON in the General Art and Sciences program and aspires to become a writer after graduation.

(from right to left) CFFF President Robert Kirkpatrick presents the Scholarship award to Em Maj with her mother Barbara. 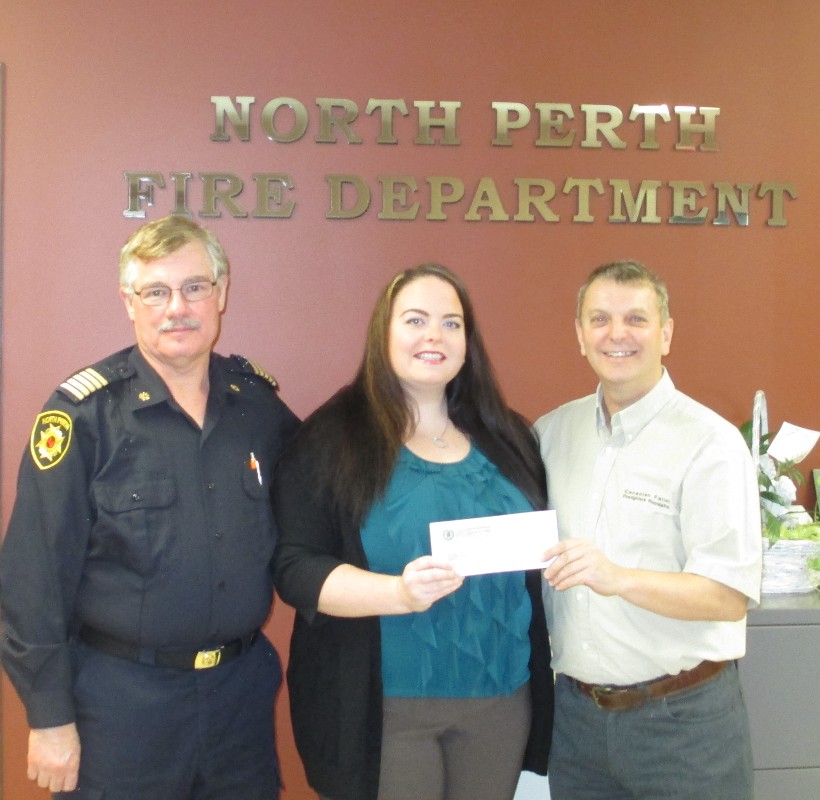 The Foundation is pleased to announce that a first $3000 bursary under the new criteria was awarded to Holly Walter, wife of North Perth Firefighter Raymond Walter of Listowel Ontario who was killed in the line of duty in 2011. Holly is studying business at Conestoga College in Kitchener Ontario and working toward further training in a project management program. On November 14, 2013, President Kirkpatrick made the presentation, on behalf of the Education Committee Chairman Tim Hinds, to Holly at the North Perth Fire Department headquarters in Listowel, Ontario with Fire Chief Ed Smith. The CFFF Scholarship was awarded to Dane Richard, the son of Fort McMurray Platoon Captain David Richard who died in the line of duty in 2003. David was honoured at the very first CFFF ceremony in Ottawa in 2004. David’s son Dane is currently enrolled at the University of Toronto. On August 25, 2010 Fire Services Day was held at the Canadian National Exhibition in Toronto. Among the events hosted by Toronto Fire Services was the presentation of a bursary to Brett Spencer from Whitby, ON. Brett’s father Toronto firefighter Jeff Spencer died in the line of duty in 2001. Foundation President Robert Kirkpatrick (r) along with Director, Toronto Fire Chief William Stewart, made the presentation to Brett at the CNE fire station. To see a video of the events that day, click here. On September 11, 2010 the Foundation made the second bursary presentation to Sarah Thibert from Tilbury, ON at the annual memorial ceremony family dinner in Ottawa. Sarah’s father, Chatham-Kent Station Chief, Robert Thibert, died in the line of duty in 2009. Making the presentation are Foundation Education Committee members, Directors (l-r),Ken Kelly, Doug Lock and Tim Hinds.